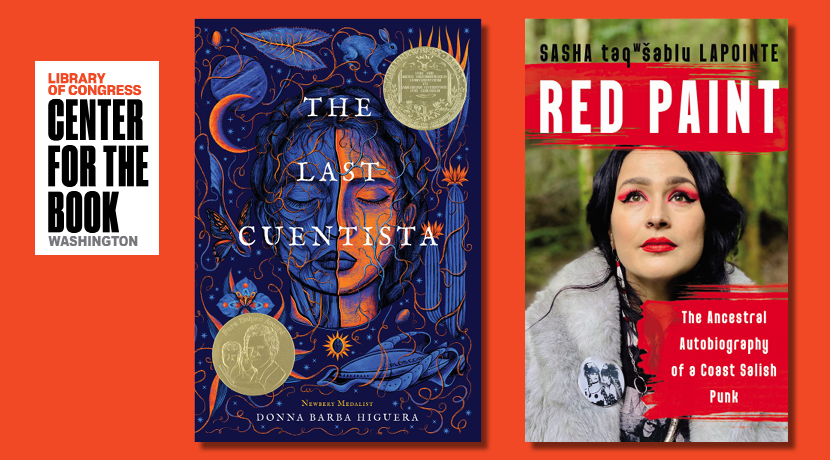 “The Last Cuentista” and “Red Paint: The Ancestral Autobiography of a Coast Salish Punk” chosen for the National Center for the Book’s Great Reads from Great Places program

The Washington Center for the Book has selected one youth book and one adult book by Washington authors to represent the state at the 2022 National Book Festival: “The Last Cuentista” by Donna Barba Higuera and “Red Paint: The Ancestral Autobiography of a Coast Salish Punk” by Sasha taqʷšəblu LaPointe.

This year’s National Book Festival on Sept. 3 will be held in-person in Washington, D.C., but will include many livestreamed and recorded virtual programs celebrating books and authors. Higuera will take part in an online panel conversation with other chosen authors from state Centers for the Book in the Western Region to talk about her book and what inspired her, what she likes most about Washington state, and more.

This and other panel discussions will be posted toward the end of August on the National Book Festival website and the Library of Congress’s YouTube channel. Higuera is also speaking in person at the festival.

Relocating to a new planet after Earth is destroyed, 12-year-old Petra Peña’s suspended animation fails during the 370-year journey, so when all the other children are mysteriously reprogrammed and the adults purged, Petra becomes the lone bringer of Earth’s now forbidden stories and her grandmother’s Mexican folklore to a changing humanity.

A starred review in Kirkus Review reads: “With poetic use of startling imagery and unabashed nostalgia, Higuera spins a tale that crosses the depths of space, interweaving Mexican folklore with a mystical strand of science fiction. An overall slow burner, this tale packs a wallop.”

An indigenous artist blends the aesthetics of punk rock with the traditional spiritual practices of the women in her lineage in this bold, contemporary journey to reclaim her heritage and unleash her power and voice while searching for a permanent home. 2020 Washington State Book Award Finalist Elissa Washuta wrote: “Red Paint is a miraculous book. Sasha LaPointe walks us through the sites of her evisceration while rebuilding a home within her body using sturdy materials: rose quartz, cedar bark, red clay, and the words of her ancestors. With each potent sentence, she shows us what access to power looks like. She shows us how to become whole.”

Winner of both the 2022 Newbery Honor and Pura Belpré medals, Donna Barba Higuera’s Middle Grade and Picture Books are about kids who find themselves in odd or scary situations.​ From language to cultural differences in being biracial, life can become … complicated. So like Higuera, characters tackle more than just the bizarre things that happen to them in their lives. Higuera likes to write about all things funny, but also sad, creepy, and magical. She lives in Washington state with her family, three dogs and two frogs.

Sasha taqʷšəblu LaPointe is from the Upper Skagit and Nooksack Indian Tribe. Native to the Pacific Northwest, she draws inspiration from her coastal heritage as well as her life in the city. She writes with a focus on trauma and resilience, with topics ranging from PTSD, sexual violence, and the work her great-grandmother did for the Lushootseed language revitalization, to loud basement punk shows and what it means to grow up mixed-heritage. With strange obsessions revolving around Twin Peaks, the Seattle music scene, and Coast Salish Salmon Ceremonies, LaPointe explores her own truth of indigenous identity in the Coast Salish territory.

About Washington Center for the Book

Washington Center for the Book (WCB) is a state affiliate of the Center for the Book at the Library of Congress. WCB promotes literacy and a love of books, reading, and libraries throughout the state, celebrating Washington’s robust literary heritage. WCB is managed by Sara Peté of the Washington State Library, a division of the Office of the Secretary of State.

For more information, visit Washington Center for the Book or email Sara Peté at [email protected].