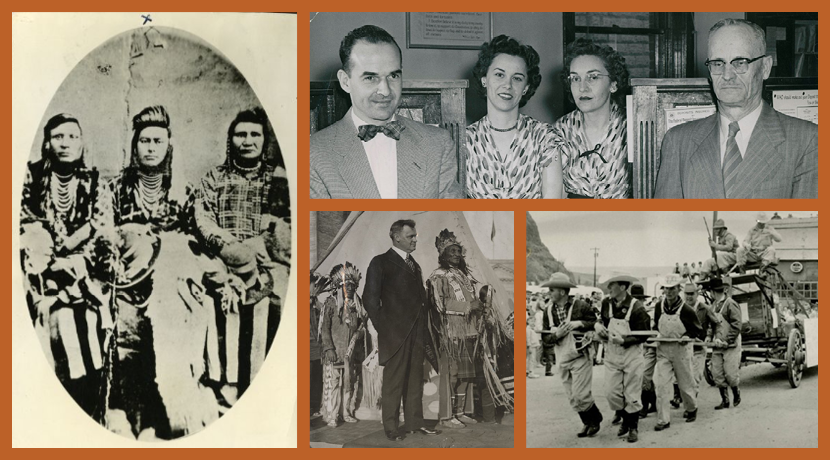 Each year, Washington State Library awards grants to libraries across the state for digital projects that document and share Washington’s rich and unique history. The 2021-2022 Washington Digital Heritage Grant awardees recently wrapped up their projects. This year’s grants encompassed a wide range of topics and mediums, from Nez Perce stories and legends to the Grand Coulee Dam. Grant recipients scanned images, created thesauri, recorded interviews, and much more.

Read on to learn more about the awardees’ recently completed projects.

These materials can be viewed as part of the Asotin County Library’s collections on Washington Rural Heritage.

View the collection on ScholarWorks.

Gonzaga University digitized 415 items (1,569 pages) selected from the James O’Sullivan Collection. These materials cover O’Sullivan’s efforts to promote the construction of the Grand Coulee Dam from the 1920s to 1940s, including photographs of the pre-dam Columbia Basin, a photo album compiled by Alice B. Starkey documenting the construction of the dam, and the 1933-1935 minutes of the Columbia Basin Commission, early planners for the dam.

The digitized images are available at the Gonzaga University Digital Archives.

The Jamestown S’Klallam Tribe launched a cleanup project for its House of Seven Generations online archives and museum, updating metadata (including personal names), removing duplicates, cross-referencing online records with the tribe’s collections database, adding 482 previously digitized items that had not already been included, and creating landing pages for eight collections — all while packing up the library for renovations.

Post-grant plans include adding an access point to the House of Seven Generations website in a new library exhibit expected to open in fall 2023 once the renovations are complete.

The Seattle Public Library collected metadata and digitized over 800 photographs from the Northwest Photograph Collection documenting the region, including Native peoples and settlers from early in the white settlement of Washington and the Pacific Northwest. The newly digitized images feature the 1949 Lummi Stommish Water Festival, Gov. Ernest Lister, the McNeil Island Penitentiary, Mt. Baker Lodge, and a selection of real photo postcards.

Learn more about the newly added items at The Seattle Public Library’s Shelf Talk Blog and view all the digitized images from the Northwest Photograph Collection.

The Suquamish Museum updated metadata to add subject headings and increase searchability for nearly 3,000 photographs and documents in its PastPerfect database. The museum also scanned an additional 2,200 slides, 381 photographs, and 270 negatives documenting the history of the Suquamish Tribe and added them to PastPerfect.

This project helps the museum better serve its community by enabling them both to share more of the collections electronically and to easily locate materials in their collections for researchers.

Whitman College and Northwest Archives used their grant funds to expand their support of The Listeners Project: Queremos Escucharte, a collaborative, bilingual community-interviewing and story-collecting project documenting the Latinx and Spanish-speaking population in Walla Walla.

At the end of the project, Whitman County Library created an exhibit showcasing some of the contributions and hosted an event for the contributing families to view the exhibit.

WSU collaborated with the Nez Perce Tribe’s Department of Cultural Resources to select, digitize, and provide tribal knowledge, including recorded cultural narratives, for 344 photographs and documents from the Lucullus V. McWhorter Collection. This collection — which McWhorter began to compile in the early 20th century when he assisted the Yakama Nation in its fight to prevent diversion of water from its reservation — includes a wealth of unique information on the Plateau Tribes of central and eastern Washington. WSU also added 63 professional photographs of Nez Perce artifacts and updated the metadata for 239 previously digitized items, including adding Nimiipuu/Nez Perce terms to the title and description fields.

View the materials from this project on WSU Libraries Digital Collections and the Plateau Peoples’ Web Portal.