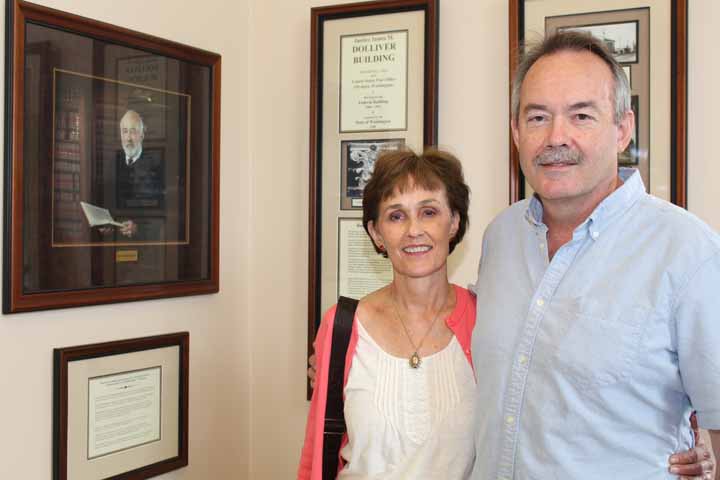 It isn’t every day that a building is named after one of your parents.

In the case of Peter and Beth Dolliver, the James M. Dolliver Building in Olympia is named after their father, who was an advisor and chief of staff for Gov. Dan Evans for 12 years and later a State Supreme Court Justice for nearly a quarter century, including two years as Chief Justice. James Dolliver died in 2004 at age 80.

The building, located at 801 Capitol Way S., houses our Corporations and Charities Division. It opened in 1915 as post office. It later housed the U.S. Selective Service System and Armed Services recruiters during the Vietnam War, as well as a congressional office. The state assumed ownership of the building in 1998. The building was named after James Dolliver in 2000.

The Dollivers and several of their friends stopped by the building Tuesday morning, where they were greeted and shown around by Corporations Division Director Tsering Cornell.

The Dolliver group later toured the nearby Washington State Archives, where they saw some of the vast collection of Evans’ records as governor, as well as documents related to James Dolliver.

The photo below shows Dolliver and Evans reviewing a document in Evans’ office in the late 1960s. The photo is found in the Digital Archives’ State Governors’ Negative Collection, 1949-1975.