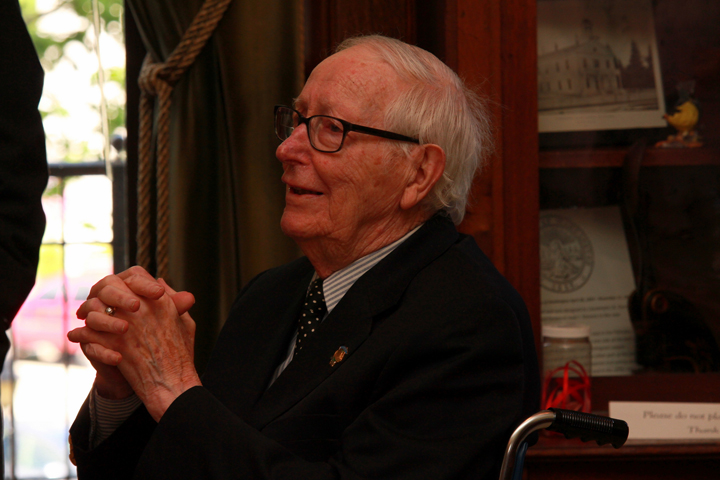 More than three decades after serving as Washington’s governor, John Spellman returned to Olympia to tour the Governor’s Mansion and Capitol and meet with current Gov. Jay Inslee.

Before seeing the governor, 90-year-old Spellman, along with two of his sons, a grandson and a granddaughter, stopped by our office to meet with staff, including two alumni from Spellman’s gubernatorial staff – State Archivist Steve Excell, who served as Spellman’s chief of staff, and Patrick McDonald, who was an intern and later an office assistant. Spellman also chatted with Legacy Washington Chief Oral Historian John C. Hughes, who wrote a biography on Spellman entitled “John Spellman: Politics Never Broke His Heart.”

“John Spellman’s mind is still very sharp, and it was nice to reminisce with him and his family about his years as governor and the people who worked with us back then,” Excell said. “It was great to see John and his family and walk with them to the Governor’s Office.”

A Republican, Spellman was elected governor in 1980 and served one term before losing in 1984 to Democrat Booth Gardner. Before moving into the Governor’s Office in 1981, Spellman was King County executive for 12 years.