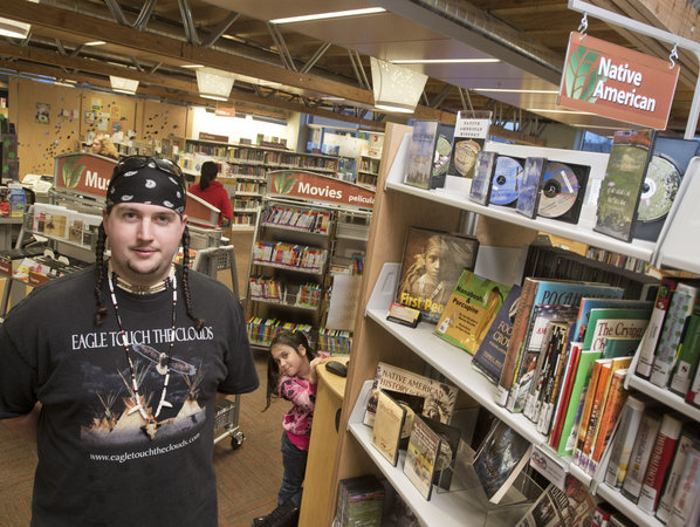 From our standpoint here at the Washington State Library, one of the best things about this summer’s Washington Library Passport Project is that every week, we learn interesting and unique things about the libraries in Washington. Everyone knows about the spectacular architecture of Seattle’s flagship branch, but often our small libraries fly under the radar. By encouraging people to visit Washington libraries and post about something they’ve learned during their visit, all sorts of interesting stories have emerged. 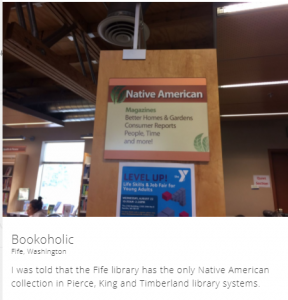 This morning, a post on the Passport provided one of those stories. The picture was taken at the Fife Public Library and the caption read “I was told that the Fife library has the only Native American collection in Pierce, King and Timberland Library systems.” This statement, in fact, is not quite true, as several other libraries in the state have collections of Native American materials but Fife’s is the only one we are aware of that was built with community donations.

Our training coordinator, Tami Masenhimer, was the Fife library manager for seven years so it only took a quick walk down the hall to satisfy our curiosity. Here is what she told us.

“The Fife library is actually built on traditional Puyallup Tribal land, so I was aware from the beginning that we have a connection to the First People. Shortly after opening the library in 2011, a young man named Shawn Reynolds came in with his daughter and asked for ‘books about his people.’ I asked for a bit more information and he said he was looking for books about Native Americans for his young daughter. I was able to show him the three books I had in the adult area, but didn’t have anything for a young child. He then asked, ‘If I find books and brought them to you, would you add them to the collection?’ I was excited by the idea and said, ‘Sure!’

A few weeks later, he came back with an armload of books, asking for me. He said, ‘Remember when you said you would add these?’ I was floored, and so excited. He had brought in children’s and adult books containing traditional stories and like nothing I had ever seen before.

This started a relationship with Shawn that still exists. He started by creating Eagle Touch the Clouds, a vehicle that allowed him to collect books to donate to public libraries, to help them build Native American collections. He worked with Puyallup Tribal elders to get a donation of Lushootseed language DVDs, with Canyon Records to get large ongoing donations of Native American CDs, brought in a Native American author for a book talk, and worked with tribal members to get donations of books specific to the tribes in the South Sound. His efforts have helped the Fife Library connect with the Puyallup Tribal members in a real way. To support this project, Pierce County Library connected with a publisher of Native American children’s books for ongoing purchasing. In addition, library staff learned to catalog in Lushootseed and Fife Library now has an important collection that celebrates the deep and rich culture of the First Peoples.

Through all of this, Shawn has been a tireless advocate for getting materials for libraries. He has a dream of collections such as Fife’s in libraries across the state and into British Columbia. I have no doubts he can make this happen!”

What a great story. The efforts of one man and a willing and helpful librarian has built a unique collection. Now you know the story too! Thank you to “Bookoholic” for helping us all learn.