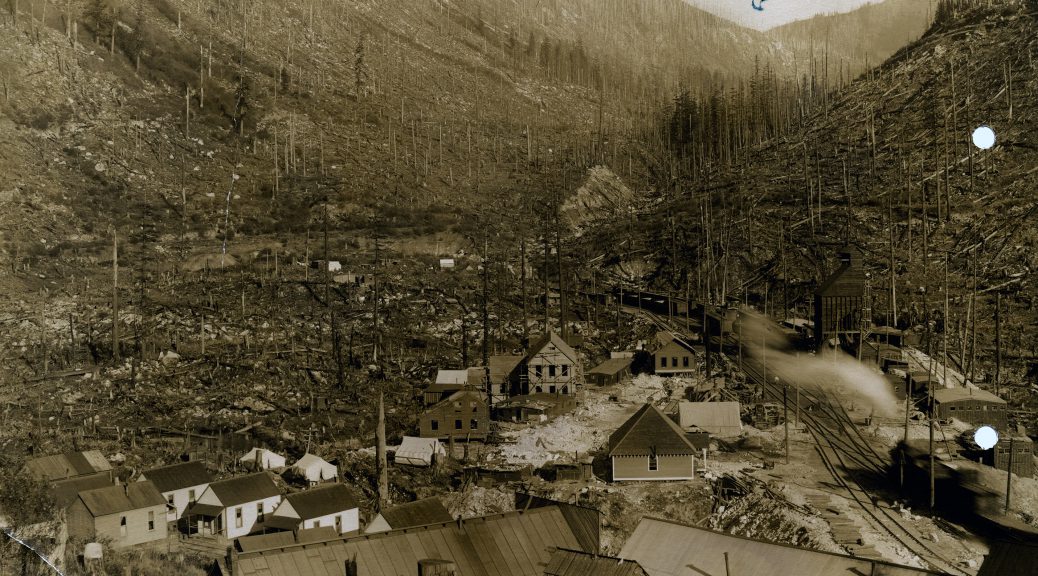 Researchers at the State Archives recently came across these photos of the aftermath from the Wellington avalanche, a disaster that struck the Cascade Mountains near Stevens Pass in 1910.

The top photo, taken eight months after the tragedy and viewable in full here, shows the devastation on the mountainsides and reconstruction progress on some of the town’s structures. Click to view a larger version of the picture to see a train in motion in the lower right corner.

The bottom photo was taken only three weeks after the slide, near the site of the historic train wreck, which was the deadliest in Washington history. Shortly after crossing into King County on February 23, 1910, two Great Northern Railway trains were delayed by treacherous weather conditions. Snow was piled on the tracks so deep that the trains were stranded for nearly a week along with more than 100 crew and passengers.

In the wee hours of March 1st, an electrical storm pounded the mountain range and led to an avalanche that crashed down on the tracks, subsumed both trains, and caused every car to tumble every car hundreds of feet down the slope.

Residents of nearby Wellington rushed to the aid of the victims and spent several days attempting a rescue mission. Only 23 people survived the wreck, while 96 died.