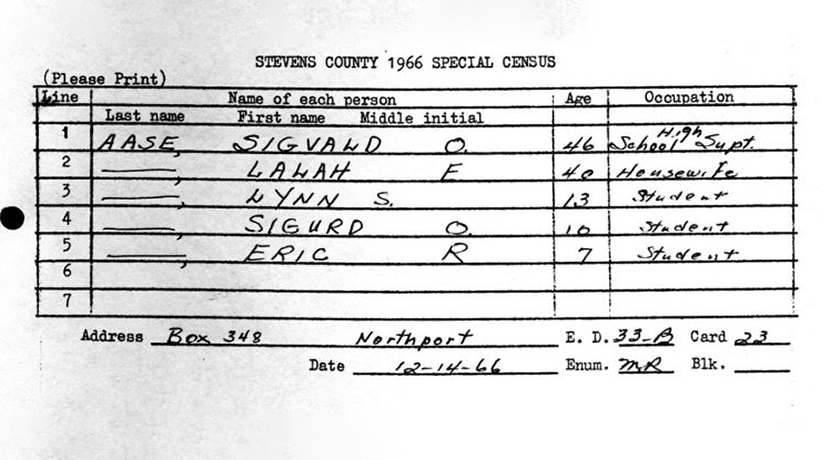 The 18th United States Census, conducted in 1960, was the first U.S. Census in which the questionnaires were mailed to households, as opposed to paid, in-person enumerators who visited each house. Previous census enumerations used mail-in questionnaires in a limited way, but the 1960 Census relied very heavily on self-reporting.

The census determined the U.S. population was 179,323,175. Over the next six years, however, there were many challenges to the census from communities which felt they were under-counted, and short-changed representation and tax monies. Critics pointed out the mail-in enumeration likely missed many folks who did not have a regular street address, like people who stayed with family, and the homeless.

Stevens County Commissioner Frank Cole, among others, felt the 1960 census failed to accurately tally the number of people in his home county, with a total count of 17,884 residents. The county was downgraded from a government of fourth class, which required 18,000 citizens, and cost them significant liquor and gasoline tax revenue, as well as representation.

The Stevens County Special Census began on December 15, 1966, and was completed by the end of the year. Each town and community in Stevens County, except Colville, used paid staff to take their census. A corps of volunteers enumerated Colville and the outlying rural areas.

It appears the 1966 Special Census was in vain as it found just under 15,000 inhabitants. Commissioner Cole and others were disappointed and there was some discussion of whether to hold a second special census.

In the end, there was no second special census.

The results of the 1970 U.S. Census showed the population of Stevens County sat at 17,405, still short of the fourth class benchmark.