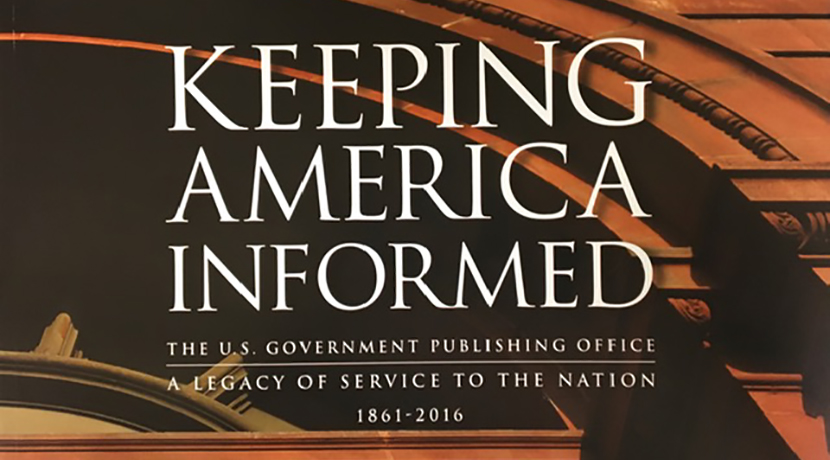 The FDLP provides free access to U.S. government information. Beginning in 1813, the program was initially headed by the U.S. Secretary of State and disseminated Congressional journals to the public through select libraries and historical societies. Over the past two centuries the program has grown and evolved — from changing ​agencies to embracing the digital revolution — all while maintaining and delivering on its mission “to provide free, ready, and permanent public access to Federal Government information, now and for future generations.”

Today the Government Publishing Office (formerly the Government Printing Office), or GPO, administers the FDLP. The GPO opened its doors on March 4, 1861 (the same day as President Lincoln’s inauguration), as the agency responsible for printing U.S. government publications. In 1895, the FDLP was transferred to the GPO under the leadership of Francis A. Crandall, the first Superintendent of Documents; and Adelaide R. Hasse, who created the provenance-based library-classification system: Superintendent of Documents Classification, which is used for Federal publications to this day.

The FDLP underwent many changes since then, both to its structure and to what formats in which the publications are distributed.

The structural changes occurred with the passage of the Depository Library Act of 1962. Significantly, it broadened the definition of the types of libraries that could participate. It also created two types of depositories: regional libraries, which are required to receive all publications produced by the GPO; and selective libraries, which can choose which items they receive. Regional libraries also provide interlibrary loan- and reference-assistance services for the selective libraries in their region in addition to people across the nation and worldwide.

By the end of the 20th century the FDLP had also experienced significant change in publication formats.

In the 1970s, the FDLP began distributing government publications in microform as well as print, yet before the decade was done the digital revolution had begun. Microform and print would remain integral parts of the program, but as government agencies began creating digital documents it became necessary for the GPO to make digital publications available to the public. In 1993 Congress passed the GPO Access Act, which authorized the GPO to create electronic access and storage for government publications. In 1994, the GPO launched GPO Access, the first electronic portal from the GPO providing access to government information. The Federal Digital System (FDsys) replaced it in 2009.

Today the GPO provides access to government information through its new portal, GovInfo, which launched in 2018. ​Digital federal publications can also be found by searching the Washington State Library’s catalog.

Over the past two centuries, the FDLP has undergone significant change and overcome many challenges. It serves a critical government function: without access to information, an informed citizenry cannot create a functional democracy. The GPO meets this need by providing transparency and information access through libraries across the country.

The Washington State Library is proud to be a member of the FDLP and to give people access to publications and research assistance. For more information, email [email protected].​

Featured Image: Cover of Keeping America informed, the U.S. Government Publishing Office: A Legacy of Service to the Nation, 1861-2016