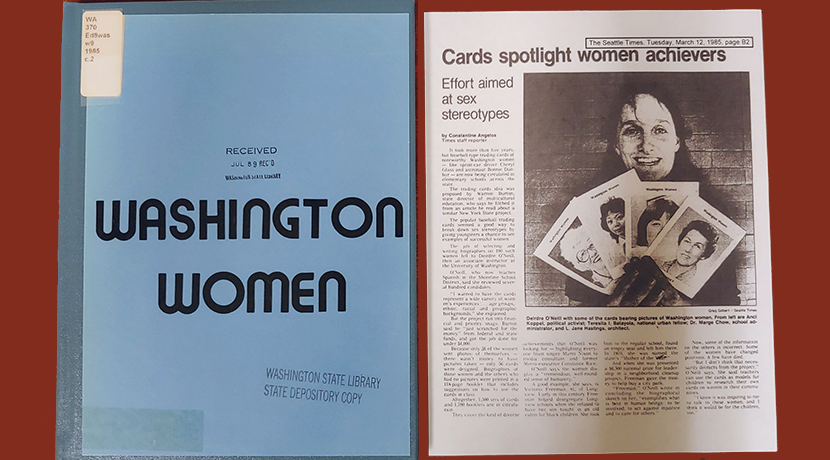 Picture it: the year is 1985. A group of children excitedly swap trading cards in a Washington state schoolyard. “I have an extra Dunbar!” “I need a Russ!” Baseball cards? No, they’re Washington Women trading cards!

In 1980, the Office of the Superintendent of Public Instruction began work on the Washington Women project to highlight the accomplishments of noteworthy women in Washington. Deirdre O’Neill, an associate instructor at the University of Washington, interviewed several hundred candidates for the project with the goal of representing a “tremendous, well-rounded sense of humanity,” according to an article in the Seattle Times.

Five years later, sets of 56 trading cards of women in fields ranging from astronaut and labor activist to science fiction author, went into circulation at elementary schools throughout the state, along with a companion book of 101 biographical sketches of Washington women. The mini-biographies were used for the “Stats” side of each trading card, often with inspirational quotes or advice such as this from Lori Lakshas, a locomotive engineer:

“If people work with people for the equality of all women, people of color, and working people, we will make a better world and a more humane society.”

The Washington Women project was never updated or repeated, but the achievements of these women are inspiring and, in some instances, still as groundbreaking today as they were 40 years ago. Cheryl Glass, Sprint Car driver, might still be considered a rarity among the motorsports community even now as a woman of color and competitor, but she chased her dreams and broke down barriers along the way by following this personal dictum:

“Whatever I do, I will do it well, otherwise I am wasting my time.”

So picture that schoolyard again with kids poring over the stats of their Sato or swapping a Koppel for a Murillo-Rohde. Don’t know who these women are or what they do? The Washington Women project can tell you all about them.