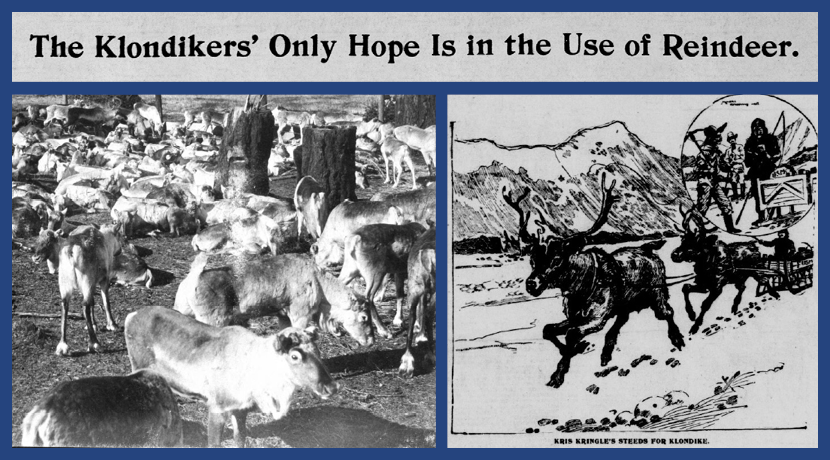 A herd of reindeer in Seattle? It happened.

These reindeer, photographed in Seattle, may have been part of a government relief effort in the winter of 1897-1898. The expedition was launched when news reached the public that numerous miners, lured to Alaska in the hopes of striking it rich during the Klondike Gold Rush, were stranded in Dawson City, Canada, with supply lines cut off for the winter.

If these reindeer were part of that expedition, they and their herders had already traveled from their home in the Lapland region of Finland, by ship from Norway to New York, and then by train to Seattle, whence they would take another ship to Alaska. The reindeer, trained as pack or sled animals, would then carry supplies to the miners.

As it turned out, the miners’ situation in Dawson City was not nearly as dire as had been thought. In fact, the reindeer faced their own starvation crisis when the stores of reindeer moss — a type of lichen — ran out before they could reach sufficient native supplies in Alaska.

Read the whole story as printed in The Seattle Post-Intelligencer:

According to a recent National Park Service article, 538 reindeer left Norway (along with 418 sledges and 511 harnesses). They were accompanied by 72 herders and their families (113 people total) and an unknown number of herd dogs. About 520 of the reindeer arrived in Haines, Alaska, but only 185 remained by the time they found a good supply of caribou moss in May 1898.

The Lapland herders who remained in Alaska helped spearhead the reindeer industry. Alaskan reindeer herding peaked in the 1930s, though there are still some herds of semi-domestic reindeer in Alaska and Canada today.

Fun fact: Reindeer and caribou are actually the same species; however, they are not the same animal, which is partly due to geography. Reindeer live in northern Europe and Asia, and caribou live in North America. In the late 1800s, there were no semi-domesticated caribou herds, which is one reason why the federal government imported reindeer from Europe.