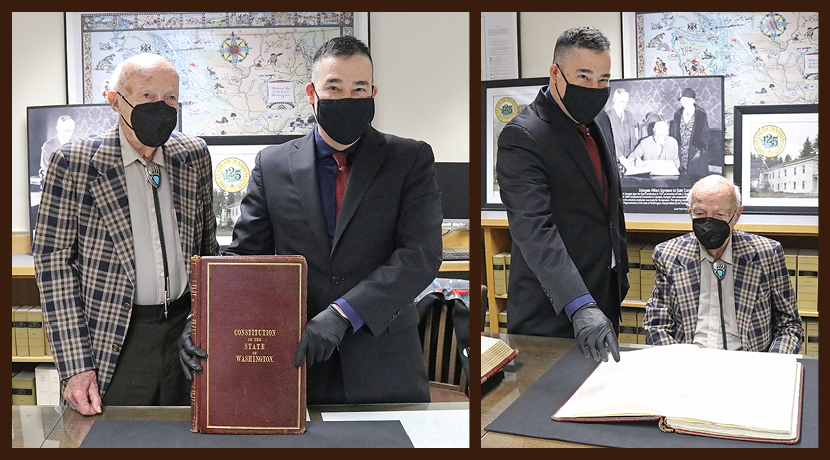 The original State Constitution is kept in a secure vault and — save for exclusive viewings and ceremonies (such as an anniversary of statehood or Constitution Days) — is not available for public viewing. Yet the opportunity for Frank to see his grandfather’s signature and further his family’s legacy not only served as a conduit to Washington’s past but offered a rare glimpse at a man who helped advance Washington’s path to statehood. James Allen Hungate’s story is unique, and Frank’s visit brought it full circle.

James Allen Hungate, a Democrat and farmer from Pullman, worked alongside his fellow delegates through the summer of 1889 to draft a constitution that would form the basis for all future laws enacted in the state of Washington.

On Aug. 22, 1889, the convention concluded its work. However, Hungate had to return to his farm before the document was completed. As a result, he was unable to affix his signature.

In 1931 — 42 years after ratification — a belated signing was authorized by resolution of the State House of Representatives and State Senate, and permitted by Washington Secretary of State Jay Hinkle.

Five years later, Frank Porter Hungate came to view the historical document that has been a part of his family’s legacy, and Washington state’s history, for 133 years. Joining him was Secretary of State Steve Hobbs to witness the event, much like Secretary Hinkle when the latter hosted James Allen Hungate 91 years ago.

“I am grateful for this opportunity to meet with Mr. Hungate and learn more about his family’s history and that of our state as well,” said Secretary Hobbs. “As a native Washingtonian who holds dear the words of our State Constitution, I am honored to see this historical document in person.”

“Washington State Archives is a treasure trove of historical documents and photos that tell the story of our state,” said Terry Badger, Acting State Archives Director. “We enjoy meeting people who have a deep connection with Washington’s history and are dedicated to keeping it alive for future generations.”

About the Washington State Constitution

The Washington State Constitution — the plan for operating Washington state government, and which describes the three branches of government (executive, legislative, and judicial) and defines the rights of the people — was framed by a convention of 75 delegates, chosen by the people of the Territory of Washington at an election held May 14, 1889, under section 3 of the Enabling Act. The convention met in Olympia July 4, 1889, and adjourned Aug. 22, 1889.

The State Constitution was ratified by the people at an election held Oct. 1, 1889. On Nov. 11, 1889, in accordance with section 8 of the Enabling Act, the president of the United States proclaimed the admission of the state of Washington into the Union.