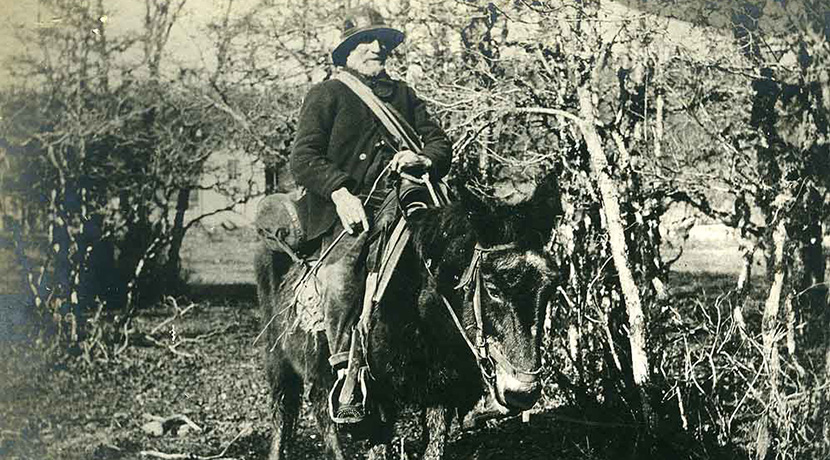 Thanks to past and ongoing digitization efforts at the Washington State Library, Washington Digital Newspapers hosts digital copies of some of the earliest newspapers published in Washington. Through their columns, early territorial editors provided a glimpse of some of the hardships faced by settlers in general, and by publishers in particular in the 1850s. This blog, one of a three part series, covers mail services in Washington territory and how they affected the news disseminated to early settlers.

Newspapers in Washington relied on the mail for news originating outside their local communities into the 1860s. Unfortunately, early mail services were anything but reliable. Mail from the states was generally sent to San Francisco, then by boat to Portland. The only official mail route in the territory ran by canoe from Portland up the Cowlitz River, then overland by horseback to Olympia. Though Washingtonians argued that mail should be sent directly from San Francisco to the Puget Sound, by-passing the dangers of the Columbia Bar, this arrangement persisted until 1858. Even when alternate routes were established, service often remained irregular.

Early papers in the territory published frequent complaints about the mail services. On several occasions, the early issues of the Columbian noted that no news from any outside papers had been received, and so there was none to print. On April 2, 1853, the Columbian reported that the mail carrier that week had gone drinking before leaving with the mail. In the meantime he allowed his horse, with the mailbag attached to its saddle, to wander and scatter correspondence over the countryside.

Over a year later, the Pioneer and Democrat exclaimed, “The citizens of this county, and a greater portion of the territory, are at present afflicted with the most miserable of all contemptible postal arrangements with which they have been subjected to since the introduction of mail facilities this side the Columbia river.” It went on to note that the mail contract could not be fulfilled as it was awarded and that the mail from Portland sat at Rainier for a week before being sent up the Cowlitz because the delivery schedules were not properly coordinated.

This all meant that any news from outside the territory was at best several weeks outdated by the time it reached the settlers on Puget Sound. James Wiley, original editor of the Columbian left in March 1853. In his valedictory, published March 19, 1853, he expressed his hope that “a division of the territory be speedily obtained,” unaware that the bill creating Washington Territory had been passed on March 2. News of its passage wouldn’t appear on the pages of the Columbian until April 30. Even with improvements in the mail system, communication remained slow.

News of Lincoln’s election on November 6, 1860 didn’t reach Olympia until November 23, and didn’t appear on the pages of the Herald for another week. News of the attack on Fort Sumter and the beginning of the Civil War in mid-April didn’t appear until May 2, 1861. The completion of the transcontinental telegraph line to California in October 1861, then a line to Portland in March 1864, and finally to Seattle October 24, 1864 drastically increased the timeliness of news on the Puget Sound and helped ease the sense of isolation from the rest of the country that earlier settlers had experienced.

Visit Washington Digital Newspapers (https://washingtondigitalnewspapers.org/) to view these and many other historic Washington newspapers. See our previous posts to learn about early newspaper publishers’ arrival in Olympia and Steilacoom and the challenges they faced in obtaining supplies for themselves and their presses.