From the desk of Sean Lanksbury. PNW & Special Collections Librarian

Signed in 1961 and ratified in 1964, The Columbia River Treaty (CRT) is an international agreement between Canada and the United States that coordinates flood control and optimizes hydroelectric energy production on both sides of the border.  The United States and Canada are set to renegotiate this important treaty in 2014.  Any decisions regarding the treaty will have profound impacts for citizens of the United States, Canada, Pacific Northwest Tribal Members and Canadian First Peoples.  Not only does the treaty guide how the nations operate hydroelectric resources and compensate the partner nation in doing so, but also how the two nations provide flood control, establish fishing rights, and address numerous environmental issues.  If either nation decided to terminate the treaty next year, the termination would take full effect ten years later, in 2024. 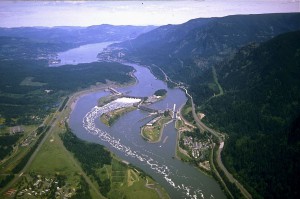 Interested in learning more about the Columbia River Treaty?  The State Library’s “Ask-A-Librarian” service is an ideal place to begin your research.  Perhaps you are curious about other Washington State issues – the Public Services Staff is at your service.

Contact the Ask-A-Librarian Service and our Public Services Team by visiting online at http://www.sos.wa.gov/library/ask.aspx, by emailing at [email protected], or by calling direct: 360-704-5221.

The State Library’s associates at HistoryLink.org, the free online encyclopedia of Washington State history, have authored some new essays on the Columbia River Treaty accessible at http://www.HistoryLink.org.   The State Library has very useful materials from across the last 5 decades that can help provide understanding and context for different aspects and sentiments on this essential piece of international lawmaking.  See below for a few suggestions.  For more details, just follow the links to the State Library Online Catalog:

Work on the 1961 Columbia Basin Treaty between Canada and the United States.

Presentation made by a working group representing interested non-Federal generating utilities regarding a treaty relating to cooperative development of the water resources of the Columbia River basin.

The Columbia River Treaty: The Economics of an International River Basin Development.  By John V. Krutilla. (Baltimore, Published for Resources For the Future by Johns Hopkins Press 1967. 211 pp. Illustrations. 24 cm.)

“Recommendations to the Obama Administration and the 113th Congress from the Treaty Tribes of the Great Lakes and Pacific Northwest, including the Columbia River Inter-Tribal Fish Commission and the Northwest Indian Fisheries Commission. February 2013.”

Written for younger readers, this work examines the background and benefits of the Columbia Treaty and the water power projects operated cooperatively by the United States and Canada. Describes the river and its tributaries, dam construction, the formation of the treaty, and the economic profits enjoyed by both nations.

« Protection Island
Clippings for the week of November 4, 2013 »