December 26th, 2013 by mschaff Posted in Articles, For Libraries, For the Public, Library 21 Initiative, News | Comments Off on State Library Assists WSJ Journalist 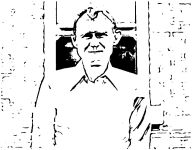 From the desk of Mary Paynton Schaff

It is not an uncommon occurrence for the reference librarians at the Washington State Library to be called upon for assistance by journalists.  Questions come in regularly from newspaper reporters, bloggers, and radio contributors.  So when Wall Street Journal reporter Michael M. Phillips contacted the Library about tracking down relatives of some Washington World War II veterans, librarian Kathryn Devine stepped up to provide information on the fates of these servicemen.  The results of Kathryn’s collaboration with him can be seen in Phillips’s monumental report for the WSJ, “Lobotomy Files.” Kathryn assisted Phillips with records, obituaries, and surviving family members for five Washington veterans profiled in “Lobotomy Files,” including Leonard Kingcade whose story is profiled in detail as a case study called, “A Descent into Madness.”

Phillips’s work with primary sources, newspaper accounts, and oral history packs an emotional wallop, especially when one draws parallels between the current psychiatric treatment of our many returning Iraq and Afghanistan veterans with PTSD.  The impact of “Lobotomy Files” can be seen in this blog post where Phillips discusses what went in to creating the report with his readers.  As for Kathryn, she says, “I’m happy the library could help Michael tell this important story.”

For all the staff at the Washington State Library, “Lobotomy Files” is a clear reminder of the importance of our historical collections.  The dry, long dead facts of one person’s life, recorded and preserved only in musty boxes and reels of microfilm, can, with diligent and compassionate research, be translated into a document that shines a powerful light on the 21st Century condition.  To find your own powerful moment in Washington history, check out the Washington State Library’s many print and digital resources.