The Koreshans, a World Turned Outside In

October 27th, 2014 by Nono Burling Posted in Articles, For Libraries, For the Public, Random News from the Newspapers on Microfilm Collection | Comments Off on The Koreshans, a World Turned Outside In

There’s a great independent filmmaker in Utah I used to correspond with and even met once named Trent Harris. In his movie Plan 10 From Outer Space (1995) a character utters one of my all time favorite lines in cinema history: “Just because it’s made up doesn’t mean it isn’t true.” For some reason this little soundbite seems appropriate for the following story.

The random news article found in this round opened a door into the strange and bizarre world of a group with some Washington State connections, including one that turned out to be quite close to home.

The following news piece was found in The Tacoma Daily News (an ancestor to today’s News Tribune), Feb. 5, 1915: 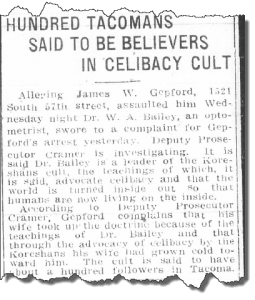 HUNDRED TACOMANS SAID TO BE BELIEVERS IN CELIBACY CULT

Alleging James W. Gepford, 1521 South 57th street, assaulted him Wednesday night Dr. W.A. Bailey, an optometrist, swore to a complaint for Gepford’s arrest yesterday. Deputy Prosecutor Cramer is investigating. It is said Dr. Bailey is a leader of the Koreshans cult, the teachings of which, it is said, advocate celibacy and that the world is turned inside out so that humans are now living on the inside.

According to Deputy Prosecutor Cramer, Gepford complains that his wife took up the doctrine because of the teachings of Dr. Bailey and that through the advocacy of celibacy by the Koreshans his wife had grown cold toward him. The cult is said to have about a hundred followers in Tacoma.

At the time of this altercation, Dr. Wilson A. Bailey was 60 years old and Gepford was a logger about 15 years his junior. It was probably not a pretty sight.

But let’s back up a bit. Who were the Koreshans? Here’s a nutshell history:

The belief system was formed by Dr. Cyrus Reed Teed (1839-1908). Teed was, in the parlance of the time, an “eclectic” physician based in Utica, New York. He relied mainly on botanical cures and dabbled in alchemy. In 1869 he was rendered unconscious by an experiment when he employed the use of electricity– apparently a little too enthusiastically. During his blackout he had a vision where a Divine being told him he was the new Christian-based Messiah.

Being an industrious fellow, Dr. Teed set off to work, renaming himself “Koresh,” which is “Cyrus” in Hebrew. The religious/scientific movement he founded was soon known as “Koreshanity” or “Koreshan Unity.” The doctrine include a belief in reincarnation, immortality, communal living, alchemy and an acceptance of Teed’s role as the current Messiah. Oh, and there were two other little details in their theology: followers were expected to adhere to a strict code of celibacy, and according to Dr. Teed, Copernicus had it all wrong. The world was hollow and we existed on the inside concave shell. This was called “Cellular Cosmogony.”

After some not so successful attempts at establishing lasting communal settlements in Chicago and San Francisco, the Koreshans began to really get serious down in Estero, Florida, starting in the mid-1890s. By the early 20th century they had an incorporated town with 250 residents and appeared to be thriving. But then something bad happened that wasn’t supposed to happen.

It was Dec. 22, 1908. His followers held vigil over his body which had been placed in a bathtub, expecting him to rise again on Christmas. Two weeks later the County Coroner told them they had better get this corpse in the ground real fast. Dr. Teed was laid to rest in a mausoleum on the premises, but his coffin was washed out to sea in a hurricane in 1921 and was never recovered. So who knows? Maybe he did come back but hasn’t announced it yet.

Anyway, after the death of the founder, the sect and the settlement began to dwindle. The whole Leader-Is-Not-Immortal thing, coupled with the belief in celibacy, tends to put a crimp on future expansion. In 1961 the last of Dr. Teed’s followers gave the commune to the public and today the place is known as Koreshan State Park. Some of the original buildings are still there.
It is impressive that several years after Dr. Teed’s death, the Koreshans could claim 100 followers in Tacoma alone. Dr. Bailey survived his assault, and died in 1921. The Gepfords apparently remained together and moved on. But that wasn’t the case for Thomas Bellingham (1858-1920), who owned a plumbing company and served as a Pierce County Commissioner. His wife Martha (1860-1919) had been an active member of the group. Her name appears on a Koreshan broadside. She left her family and became a resident of the Florida commune about 1917, the same time Thomas assumed his political office. She died within two years.

Tacoma was not the only place in Washington where you could find Koreshans. A letter to the editor of the Morning Olympian, Aug. 15, 1914, began with the preface, “There are in Olympia a considerable number of persons who believe the war in Europe is the beginning of the end of the world.” This was soon followed with, “We are not making any predictions, but simply desire to call the attention of your readers to the warning given out and published in Koreshan literature during the past forty-five years.” Then a long and difficult to follow screed is presented.

Although he did not appear to join the group, there is some evidence from published correspondence in the Koreshan newspaper, The Flaming Sword, that Washington State Representative William Lowrey Freeman (1856-1936) was intrigued by and studied the theology of Koreshanity in 1897. Freeman had been elected as a representative for the 22nd District as a Populist during that party’s sweep in 1896. He was a a physician who had been educated at a medical college in St. Louis but also had “eclectic” medical interests, leading him to further studies at places like the Buchanan College of Therapeutic Sarcognomy, the Herring Medical College of Homeopathy, the Bing Swanger School of Electricity, and the Weltmer School of Suggestive Therapeutics.

Mildred Fischer Barager, who died in Seattle at the age 94 in 1995, provided a very detailed oral history in 1982 to the Florida Park Service concerning her childhood in the Koreshan commune. She was probably the last living person to give an eyewitness account of Dr. Teed himself.

And speaking of Dr. Teed, I am saving the best Washington State connection for last. Yes, it is confirmed, Dr. Cyrus Teed is a distant relation to our own Bill Teed, IT Guru here at the Office of the Secretary of State.

« WSL Updates for October 23, 2014
Summer Reading at our Institutional Libraries »