February 13th, 2015 by Nono Burling Posted in Articles, For Libraries, For the Public, Random News from the Newspapers on Microfilm Collection | Comments Off on Random news – Meteors, or UFOs?

Through pure randomness I ran across a couple mysterious events experienced by Washingtonians in the north central part of the state in late December, 1921. 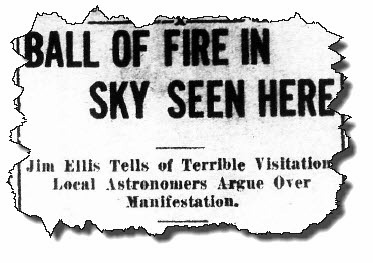 One of the benefits of working in a library with the largest collection of Washington State newspapers in the world is that I can focus on singular events from a multitude of views. Such is the case with the twin meteors during the 1921 holiday season, over 90 years ago.

In the December 29th and 31st, 1921 issues of The Wenatchee Daily World, witnesses from Soap Lake were quoted as having seen a meteor light up the sky at 12:30 AM on December 27. One man, R.J. Cartmill was certain the object had fallen to Earth and crashed in a ball of fire.

Two days later, a more dramatic event took place around the 7 AM hour. Jim Ellis, a prospector, was quoted in the January 6, 1922 issue of The Oroville Weekly Gazette:

“When I got outside my cabin there was no fire but the glare caused me to look up and there was a big ball of flame, bigger than the First National bank, heading right for Oroville. Sparks from the thing were dropping on the roof of my cabin and on the snow around. It made a big sound, like a heavy wind as it traveled, and it was going fast, I thought the world was coming to an end. I watched it until it went out of sight in the clouds and fog and little later I heard a big explosion. I thought Oroville had been wiped out and I started for town to see the wreck.”

The explosive sound could very have been a sonic boom. In conjecturing the cause of this unusual event, the Gazette added, “So many persons in this part of the country saw manifestations of the phenomenon or felt the effects of the explosion that it is accepted as altogether probable that some stray wanderer from interplanetary space visited this locality and either buried itself in the hills hereabouts or exploded nearby, consumed by friction with the earth’s atmosphere.” 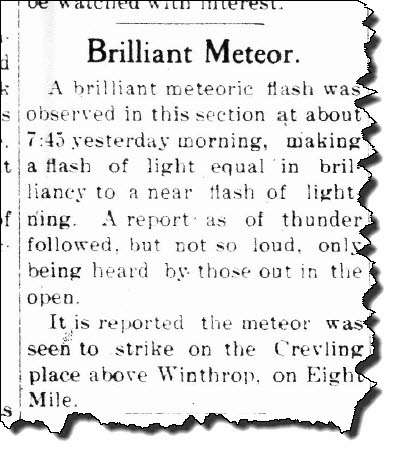 The Methow Valley News in Twisp reported in their December 30th issue that the meteor had “a flash of light equal in brilliancy to a near flash of lightning. A report as of thunder followed, but not so loud, only being heard by those out in the open. It is reported the meteor was seen to strike on the Crevling place above Winthrop, on Eight Mile.”

The January 3, 1921 issue of the Okanogan Independent of Okanogan, Wash. reported: “J.E. Crofoot, living on the reservation 16 miles east of here, was out near his granary at the time of the fall, and was thrown against a steel feed roller and stunned for several minutes. Crofoot’s neighbor reports a similar experience. The phenomenon was thought by them to be lightning. Crofoot, with whom we had a telephone conversation, says that the flash was quick rising, quick dying and all-embracing, and seemed to have with it no sound whatever. Crofoot’s sense left him, he says, so that he had neither eye to discover wherefrom it came, ear to catch any rumbling or booming; and was for several passing moments, totally without speculative faculty, so that, to this hour, he remains in a state of mere gloom and fog as to the exact nature of the phenomenon: saying, however, that it looked like lightning. ‘For a minute, I seemed to be in a ball of fire,’ says Crofoot. Mrs. Crofoot, who was within doors, detected a booming.”

The Tonasket Times and the Okanogan Record issue for December 30th reported on a good number of witnesses from the area. The descriptions were consistent with the other newspaper reports, with the addition of the object flying over with a hissing sound. 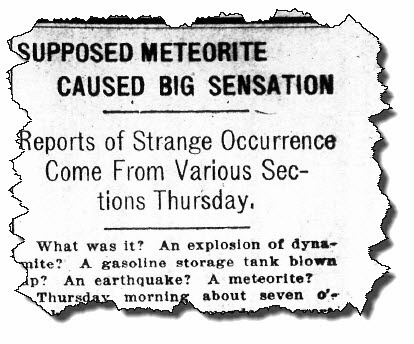 So what were these things? The Ursid meteor shower usually takes place every year around December 22nd. This annual astronomical event was not named until the early 20th century. Could these two meteors be connected somehow with the Ursids? Or, as the Gazette suggested, did we have extraterrestrial visitors? If a crash site exists for whatever these flying things were, I have found no record of the discovery.