Con Artists take note, you’ve got nothing on J. A. Fallgatter!

September 22nd, 2015 by Nono Burling Posted in Articles, For Libraries, For the Public, Random News from the Newspapers on Microfilm Collection | Comments Off on Con Artists take note, you’ve got nothing on J. A. Fallgatter!

Stories about con artists were a regular feature of early Washington newspapers. Some, like this article from the August 22, 1902 issue of The Lind Leader, are more amusing than others:

J.A. FALLGATTER HAS SKIPPED OUT.

Proved to be a Grafter from Graftersville.– He Left Debts Galore.

J.A. Fallgatter, erstwhile proprietor of the Lind Art Studio, is gone– whither deponent saith not. He boarded a train at two o’clock last Friday morning and has not been heard of since. 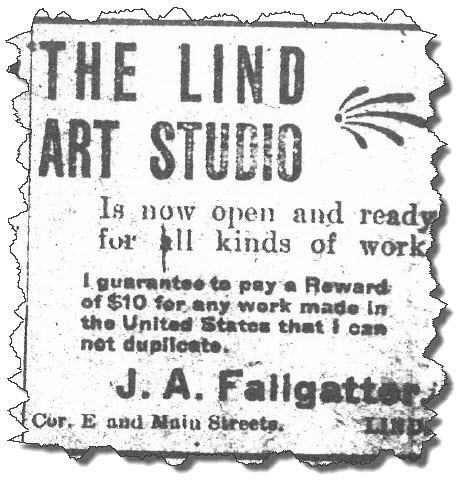 Fallgatter proved himself to be an artist in more than one line. As a photographer he was nothing extra, but he was a past master in the art of grafting and he worked not only Lind, but the adjacent country, right. He worked it to a finish, to a fare-you-well. For thoroughness his job of doing up the country would be hard to beat.

He owes nearly everybody from Paha on the east to Hatton on the west. North and south hill stretch from the Odessa neighborhood to Washtucna.

All he left to satisfy his creditors is a cheap building covered by a lumbermen’s lien and a fourth class photograph gallery outfit that is mortgaged for more than it is worth.

Fallgatter came here a few months ago with a camera, rented a room of Sam Armstrong and commenced taking pictures. As soon as he became acquainted he asked the St. Paul and Tacoma Lumber company for lumber, on credit, to put up a gallery. As he seemed to be a good rustler and stuck strictly to business he got it.

In the meantime he had, by securing a few small loans, raised money enough to buy a new camera and other things needed to start a gallery. He told the Bruster brothers, the carpenters who put up his building, that he could not pay them for their work until fall and gave them a note for the amount owed them, secured by a mortgage on the outfit.

It has been about two months since he put up the building. He has been doing some business right along but the “enormous expense” of starting up left him so short of money that he bought everything on credit that he could. Occasionally some creditor– generally an imaginary one– would press him for money and he would work the “rush act” on some acquaintance for a small amount. 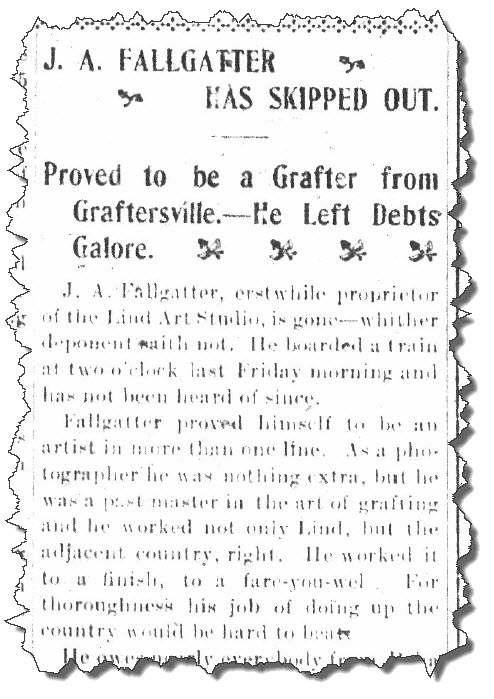 When the Lindites got to comparing notes after his departure it was found that by borrowing money, making purchases on credit and “standing off” people who had worked for him he owed nearly every man in town and several of the women. The majority of these bills are small ones, ranging from a few cents to $5 or $10.

Besides the stunts referred to above he had another one for connecting with cash and this one he worked on the country people. As soon as harvest commenced he traveled through the country taking farm views. Wherever he was given work he collected all he could on the pictures ordered as a guarantee of good faith and very few of these pictures were ever finished. He had been working that little graft for two or three weeks before making his sneak and is said to have made a nice little clean-up by it.

It is very evident that Mr. Fallgatter did well here. He landed in Lind dead broke and is supposed to have left with not less than $500 in his jeans.

He owed Misses Ella Sturdivan $20 and Una Scott $15 for work in the gallery.

When a later con artist showed up in Lind and relieved some suckers of money, the newspaper said the victims had been “Fallgattered.”

In addition to working as a photographer, he was also a minister, a farmer, and a carpenter. He died in Northern State Hospital in Sedro -Woolley, May 29, 1924.