The Arbuckle Scandal in the Seattle Star

January 20th, 2016 by Nono Burling Posted in Articles, Digital Collections, For Libraries, For the Public | Comments Off on The Arbuckle Scandal in the Seattle Star

From the desk of Marlys Rudeen – Former Deputy State Librarian

The scandal surrounding Roscoe “Fatty” Arbuckle and the death of Virginia Rappe played into many of the anxieties of the general public in the early 1920’s.  Changing morals, the role of alcohol in American life, the growth of the movie industry and its effect on modern youth were all hot buttons that were pushed in the various inquiries and trials engendered by Miss Rappe’s death.  A movie actor beloved by all became one of the most excoriated men in America.  While many were genuinely scandalized by the glimpses of high life in the movie colony, they were also titillated by reading the sordid details, and enjoyed doing so in a proper morally indignant manner.  The Seattle Star joined in the circus with great enthusiasm. 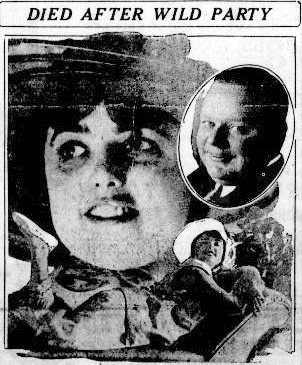 You can follow the story yourself at the Chronicling America web site at the Library of Congress.  Use the drop-down to choose 1921 or 1922 and then choose the issue using the calendar display.  I’ve tried to find citations to illustrate the growth of the story and have identified the issue dates and page numbers below.

p. 1 By the 12th, the story has moved to the front page, as Arbuckle is charged with murder. A witness is named and we begin to see the common trappings of journalistic scandal as the witness, Mrs. Bambina Maude Delmont, collapses in court after swearing to the complaint.

p.1 By the 13th, the case rates the main headline complete with a photo montage of Miss Rappe and Arbuckle captioned “Died after Wild Party”. The story reports the results of the inquest where the prosecutor refused to indict Arbuckle due to inconsistencies in witness testimony.

p.1 The 14th is a day of mixed messages. One the one hand the paper reports that Arbuckle is likely to be tried on the lesser charge of manslaughter though no firm decision has been reached.  On the other hand the paper can express its shock and dismay at the attention the case is getting and indulge in the rampant sentimentality of the time, “Women Pray, Drop Flowers by Coffin of Girl who dies in Orgy.”  It’s the traditional joining of titillation with finger wagging, and continues on p. 16 where it is reported, “The fact that two doctors were scheduled to give testimony of a nature which may be unprintable had not deterred probably a score of women and girls from taking seats among the spectators.”

p.1 By the 16th the headline screams “Fatty Facing Murder Trial” and traces the steps in the legal process. Another article consists of an interview with his stepmother who remembers him as a lazy, irresponsible child who has never wanted any further contact with his family after leaving home. In yet another article, the comedian’s wife is described as speeding to his side to support him in proving his innocence.

p. 18 Articles begin to appear on the efforts to “clean up” Hollywood by refusing to employee actors who behave badly.

p.6 Also on the 16th, a popular feature writef, Fred Boalt weighs in with an opinion piece, mourning the fact that whatever happens to Arbuckle, he will never laugh at one of his pictures again – “It is much better that we – and the theatres – should consider Fatty Arbuckle actually and permanently dead.”

p. 1 “Fatty’s Film Burned by Mob!” The Sept. 17th headline calls forth visions of mobs rampaging through Times Square perhaps. Actually a mob of “hundreds of persons” did attack a movie theatre and burn one of Arbuckle’s films – in Thermopolis, Wyoming.  No other mobs are reported.  There is also a photo montage of the “Women Witnesses in Arbuckle Case”, all looking mysterious and fashionable. 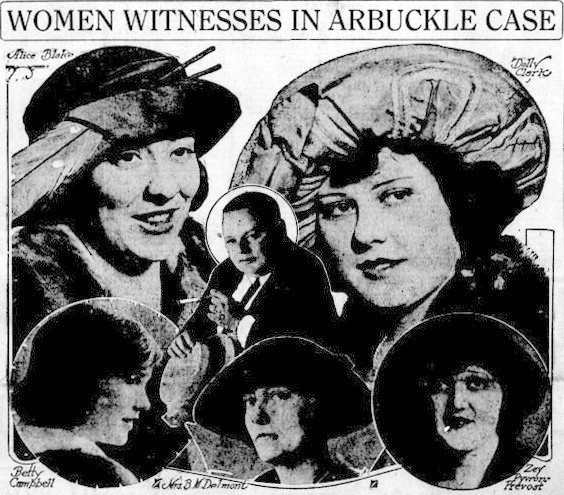 The coverage continues on a daily basis with everyone putting forth a theory on Arbuckle’s actions:

p. 14 “Liquor is to blame for it all.” Says comedian Charles Murphy.

p. 5 “He’s just an overgrown boy,” from Minta Durfee, Arbuckle’s estranged wife who has rushed to his side in support.

The Arbuckle stories are bumped out of headlines for several days by the equally famous (in Seattle) Mahoney murder trial.  But they carry on reporting on the preliminary hearing.

p.1 The committee of club women bent on assisting the district attorney have front-row seats reserved for them.

p.1 Headlines are back on the 27th “Showgirl Hurls Charges at Arbuckle” as “pretty show girl,” Zey Pyvron accuses Fatty of torturing Miss Rappe with a piece of ice, saying “That will make her come to.”

p. 1 “Arbuckle soon to hear fate!” The crowds continue to attend and the final arguments and one of the defense witnesses is poisoned by a middle-aged man thought to be a crank.

p.1 The trial ends with a hung jury and charges of attempted jury intimidation will be investigated.

Roscoe Arbuckle will go through two more trials as a result of Miss Rappe’s death.  The second trial runs from Jan. 11 to Feb. 3, 1922 and again ends in a hung jury.  Coverage is fairly perfunctory.

p.7 The defense has rested their case without calling Arbuckle to the stand, evidently feeling they had a strong case.

p.1 But again the trial ends with a hung jury, with 10 jurors arguing for conviction.

p. 8 A brief article notes that Arbuckle’s attorney have adopted a much more aggressive stance in the courtroom.

p. 7 The third trial ends in a definitive acquittal – “Edward Brown, foreman of the jury, issued a statement asserting that a great injustice had been done Arbuckle, and wishing him success.” Unfortunately the vindication comes much too late to salvage his film career.

Given that Seattle is an urban environment, I was curious to see if a rural community would demonstrate the same level of interest in the case.  I searched mightily thru the Pullman Herald for any comparable coverage – nothing.  Other than movie ads printed prior to the scandal, the only mention of Arbuckle was the reprinting of a small editorial from the Moscow Star-Mirror on Dec. 29, 1922 after Arbuckle’s acquittal in his third trial.  It basically took the stance that he might have been acquitted, but no one wanted him around anymore, and that his screen persona was too far removed from his personal life to be attractive to audiences. (Pullman herald., December 29, 1922, Page 6)

The Seattle Star was digitized through a grant from the National Endowment for the Humanities under the National Digital Newspaper Program.  The Star and many other American newspapers can be found online at Chronicling America at the Library of Congress.

Additional newspapers for Washington can be found at Historic Newspapers at the Washington State Library’s web site.  The State Library is a Division of the Office of the Secretary of State.