February 21st, 2017 by Nono Burling Posted in Articles, Digital Collections, For Libraries, For the Public | Comments Off on Centralia Daily Hub

From the desk of Nikki Chiampa

The Centralia Daily Hub began as an Independent newspaper on September 29, 1913 with editor George A. Dew and publisher Madison “Elsy” Ellsworth Cue at the helm. The other publisher of the paper was the Hub Printing Company, Inc., an enterprise of which Cue was president. The Daily Hub was issued every afternoon with the exception of Sundays, reporting on both international and local news. Within a year of its inception, circulation of the paper had risen to approximately 1,141 issues, with distribution in Centralia and surrounding towns. During this time, Dew left his post at the paper and was succeeded by Victor Jackson. When Jackson left the paper in 1915, Cue ended up taking on the editorial role as well.

Significant events, including WW1, Women’s Suffrage, and Prohibition initially appeared as headlines on the front page. As time wore on, however, the newspaper shifted its focus to cover more socially inclined news on a local scale. The Daily Hub often took on a moral stance and eschewed objective reporting in its articles. When referring to the “drys,” those fighting for Prohibition, the paper describes the group as the “better element of this city.” In contrast, it berates the “clique” of local bankers and businessmen, declaring that these men defrauded the city during Centralia’s financial crisis of 1914. The Daily Hub remained righteous even when the topic was not political, expressing outrage at provocative movie posters on display at a local theater. The paper claims that “those whose mission it is to uplift, protest, and help to a better living” were being careless and slothful with their duties.

By its third year of publication, The Daily Hub was boasting of its “clear conscience” and the enemies it has gained, labeling their opponents as the “lawless and predatory” populace of Centralia. However, staff of The Daily Hub were not immune to the consequences of their antagonism. In one case, Vera Reynolds, a staff writer, was arraigned in court for libel. She alleged in one of her articles that prosecuting attorney Chester Alan Studebaker and Sheriff Thomas C. 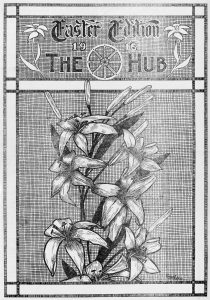 Foster were “laid out” by Frank Nehring, whom they were attempting to arrest. Even The Daily Hub’s publisher, M.E. Cue, was tried in court multiple times and charged in 1916 for throwing a pig of linotype metal at Joe Lucas, a local theater manager.

After only five years and with 2,228 papers in circulation, The Daily Hub officially ceased publication on March 30, 1918. It was succeeded by The Centralia Evening Hub, which ran for the month of April that same year. Immediately thereafter, it transformed into the Republican paper, The Centralia Daily Hub, which was issued from May 1, 1918 until publication was suspended on April 10, 1919. During these rapid changes, M.E. Cue and his company remained as publishers up to the final issue of the paper’s demise. Although the Centralia Daily Hub announced plans to return from its “sabbatical,” it had no successors.

The Centralia Daily Hub along with many other early Washington newspapers can be found on our Washington Digital Newspapers website.