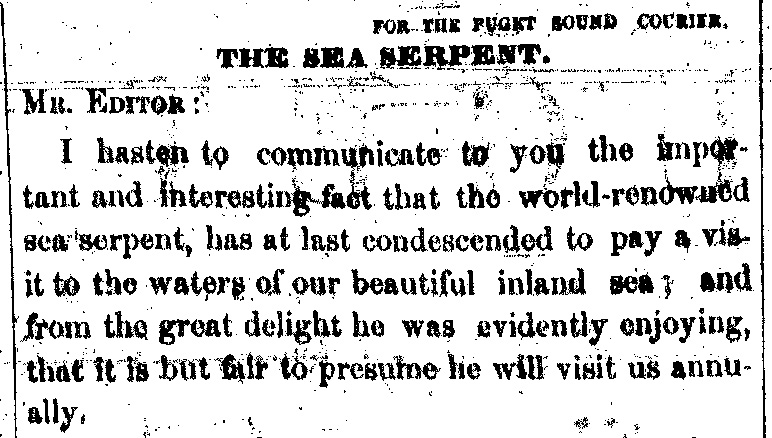 Sea serpent stories are developing into a subgenre in this column. Although the creature described here resembles the “DungeNessie” serpent sighted in 1892 in the Strait of Juan de Fuca, this particular sighting took place very near to the 1899 episode of The Sea Serpent That Got Away.

This article was found in the Dec. 7, 1855 issue of the Puget Sound Courier, published out of Steilacoom. The serpent was seen off of Devil’s Head, on the tip of the Key Peninsula. Then it took off and vanished between McNeil and Anderson islands. It is interesting that all of the geographic names mentioned in this article have remained essentially unchanged since 1855:

“I hasten to communicate to you the important and interesting fact that the world-renowned sea serpent, has at last condescended to pay a visit to the waters of our beautiful inland sea; and from the great delight he was evidently enjoying, that it is but fair to presume he will visit us annually.”

“For the gratification of the hundreds of thousands of anxious people in the world who have seen in the papers so many unsatisfactory accounts of his mighty snakeship, I will endeavor to give a correct and truthful description of him, praying all who may read it, to give the relation their full, firm, and entire belief. Early in the morning of yesterday, December 2nd, a party of us left Johnson’s Point, so called, where we had camped the night before, on our way from Olympia to pass ‘down the Sound.’ We had just fairly got started, some two hundred yards, perhaps, from the shore, when I, who was steering the boat, noticed a sudden and unusual commotion in the water in the direction of the Devil’s head– a high Bluff bank so called, and directly in our track. Pretty soon the flurry was over and the waters subsided into a calm. For a moment I supposed that there was a shoal of ‘Killers’– gamboling, which, being a common occurrence, I took no further notice of.”

“Looking again in the same direction, however I saw intervals of some ten feet apparently four round, dark looking spots, somewhat resembling Buoys, upon the water. This awakened some curiosity in my mind, and I gazed upon the phenomenon intensely; but when I saw as I did a moment after, an object of startling appearance rise gradually from the water to a height of fifteen feet, seeming to connect with the dark spots on the surface. My amazement was complete, and I immediately directed the attention of those who were with me in the boat, Messrs Ramsay, Turnbull, Clough and Shanutt, to the singular looking object and asked them their opinion of it.” 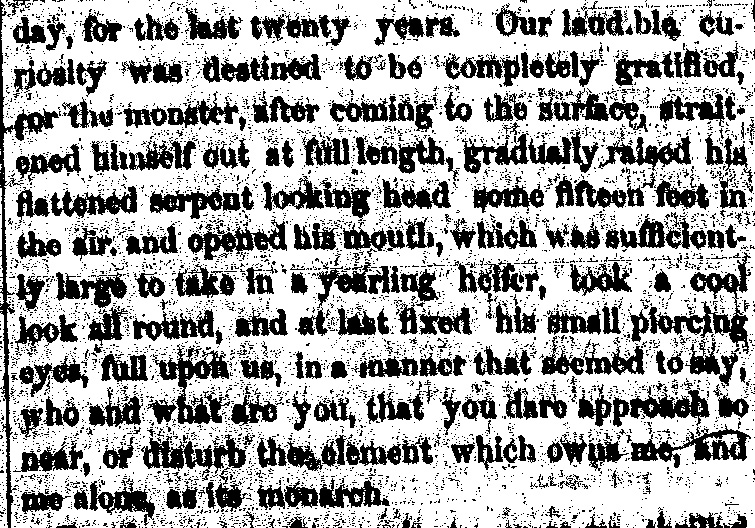 “They immediately ceased rowing and looked in the direction indicated by me anxiously and earnestly for someminutes, when the truth as to its real nature seemed to break upon our minds simultaneously, and we all exclaimed at once ‘its the Sea serpent its the Sea Serpent!’ Ah, then it would have done you good and made the ‘cockles of your heart beat with joy’ to see how four white ash oars were made to bend and spring under the vigorous strokes of as many athletic young, men creating a miniature water fall under the bow of our sweet little craft. ‘Give way strong my lads, Give way strong’ was the cheering word frequently given; and they did ‘give way’ strong, for, in fifteen minutes we had accomplished a distance that ordinarily takes forty five, and had reached the spot as near as we could judge, where we had seen his royal Snakeship. We then lay upon our oars and looked about us in all directions for a nearer and better view of the distinguished stranger– not long was we doomed to look in vain, for within five minutes from the time we ceased pulling, the monster again rose to the surface on our Starboard Bow and within thirty yds. of us.”

“If we were surprised before, when seeing him from a distance we now were perfectly amazed, and so badly frightened withal, that there was not one in the party, who did not send up an involuntary and sincere prayer to Heaven for a safe delivery from the neighborhood of so hideous and dangerous looking a Customer. Curiosity however, was stronger within our breasts than fear and consequently we took no measures to get an offing but determined, on the contrary, to hold out where we were, and if possible get a good view of the animal from head to tail and thereby determine his length, size, color, and general appearance, that we might contrast him, as a whole, with the descriptions we had from time to time seen in the journals of the day, for the last twenty years.”

“Our laudable curiosity was destined to be completely gratified, for the monster, after coming to the surface, straitened himself out at full length, gradually raised his flattened serpent looking head some fifteen feet in the air, and opened his mouth, which was sufficiently large to take in a yearling heifer, took a cool look all around, and at last fixed his small piercing eyes, full upon us, in a manner that seemed to say, who and what are you, that you dare approach so near, or disturb the element which owns me, and me alone, as its monarch.”

“For the space of ten minutes we were thrilled on the marrow in our bones by the indescribable and strangely fascinating look, and I verily believe that if our soul’s salvation had depended upon this action, so trivial as that as a single sweep with our oars, that we could not have given it– for we were so utterly amazed at the huge proportions of this monster of the ‘Deep’ and so nearly petrified with fear at finding ourselves in such close proximity to him, as to be completely incapable of the least effort,– not for a thousand worlds would I again experience the agonizing sensatives that my mind was tortured by in those ten minutes, or be again so entirely at the mercy of this hideous and frightful looking Serpent.”

“I am aware that there thousands of incredulous persons in the world who utterly disbelieve the tales that are told of this mighty Ocean Snake, and will dare even to deny the truth of this relation, and accuse the writer of having a distempered imagination or disposition to practice upon the credulity of the silly, and the inexperience of the young. To such I would say, that my imagination is neither distempered nor ardent and that I have no disposition whatever to impose a falsehood upon the simple and credulous. The length of this monster was about 90 feet, and his average size nearly that of our firs. His color was a dirty green, and his whole body, apparently, covered with scales.”

“At the expiration of ten minutes he turned his head in a northerly direction, and the last we saw of him he was making a ‘strait wake’ through ‘Balches passage’ at the rate of 20 miles an hour.”

The Puget Sound Courier is one of many historic newspapers that has been digitized by the Washington State Library and is available online.