Preserving the History and Culture of Washington State

April 1st, 2014 by Rand Simmons Posted in Articles, For Libraries, For the Public, Library 21 Initiative, State Library Collections, Tribal | Comments Off on Preserving the History and Culture of Washington State

From the desk of Brian Frisina

Washingtonians know the importance of preserving the history and culture of our great state. 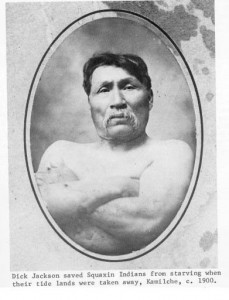 Mr. Jackson is shown in the Illustrated History of Mason County, by Susan Olsen and Mary Randlette (1978) Additional information on Dick Jackson can be found in the rise and decline of the Olympia oyster, by E. N. Steele [Elma, Wash., Fulco Publications, 1957]

Libraries play a very vital role in society. They provide access to both printed and online information, their collections preserve historical moments, and above all they are the stewards of the history and culture of society.

Libraries also provide people with free opportunities to learn through books, magazines, newspapers, and documents. These opportunities uplift our society and helps us to be the best human beings we can be.

In my research I was looking for some rare images. One image I was looking for was of a person name Dick Jackson, from the Sqauxin Island Nation. Mr. Jackson played an important role in keeping his people from starving during the 1900s. The image on the right was preserved at the Washington State Library.

Brian Frisina works at the Washington State Library branch in the Department of Labor and Industries, He is active in American Indian issues.