Never let the facts get in the way of a good yarn.

December 29th, 2014 by Nono Burling Posted in Articles, For Libraries, For the Public, Random News from the Newspapers on Microfilm Collection | 2 Comments »

My father was a master storyteller who had a saying, “Never let the facts get in the way of a good yarn.” I think some reporters must have that motto as well, or at least they did in 1890.

The following article was found at random in the Columbia Chronicle, September 20, 1890. This was the newspaper for Dayton, Washington: 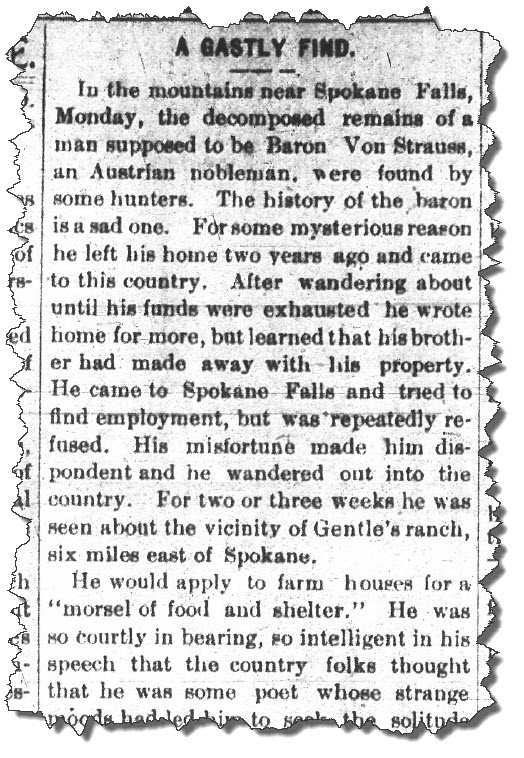 In the mountains near Spokane Falls, Monday, the decomposed remains of a man supposed to be Baron Von Strauss, an Austrian nobleman, were found by some hunters. The history of the baron is a sad one. For some mysterious reason he left his home two years ago and came to this country. After wandering about until his funds were exhausted he wrote home for more, but learned that his brother had made away with his property. He came to Spokane Falls and tried to find employment, but was repeatedly refused. His misfortune made him despondent and he wandered out into the country. For two or three weeks he was seen about the vicinity of Gentle’s ranch, six miles east of Spokane.

He would apply to farm houses for a “morsel of food and shelter.” He was so courtly in bearing, so intelligent in his speech that the country folks thought that he was some poet whose strange moods had led him to seek the solitude of the mountains. To no one, notwithstanding that he spent several evenings socially with those who entertained him, would he reveal the deep secret of his wanderings in the fields.

One day– the last day he was seen alive– he called at Gentle’s ranch and left an elegant but empty purse, saying that he was going into the mountains to starve. Little attention was paid to what he said. They thought that his utterance was merely the expression of a morbid nature seeking seclusion.

He walked off toward Moran mountain and Sunday the horrible find of his body with bones protruding from the decomposing flesh, mutilated by wild animals, reveals the story of an Austrian count who literally starved himself to death in a strange country.

The story was national news for a couple weeks. Many of accounts were far more graphic in relating the gruesome details.

According to various news sources, Baron Von Strauss had departed Budapest ca. 1888 and made his way across the United States, from New York to Chicago, to San Francisco, spending freely until he ran out of funds. When he wrote back home for more money, the Baron discovered his brother had helped himself to the entire family treasury and fled to India. Left high and dry, the Baron made his way to Portland, Tacoma and finally Spokane, where he cut the figure of an elegant tramp.

The two pheasant hunters who found the Baron’s remains on September 8, 1890 were said to have buried the body on the spot.

The notion of a wayward member of European nobility, a stranger in a strange land stranded with no financial resources or skills, buried in the wilderness has sort of a melancholy romance to it.

But, The Spokane Falls Daily Chronicle ran a story on this incident on September 9 and 10, 1890 with a different set of facts, including that the Sheriff brought the body into Spokane. Somehow the other newspapers didn’t choose to run this more mundane version. Here’s the article from the 10th:

HE WAS A SHOEMAKER 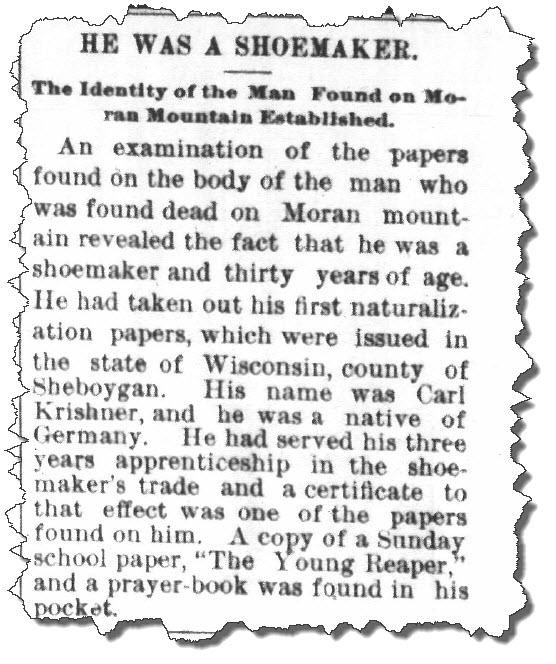 The Identity of the Man Found on Moran Mountain Established.

An examination of the papers found on the body of the man who was found dead on Moran mountain revealed the fact that he was a shoemaker and thirty years of age. He had taken out his first naturalization papers, which were issued in the state of Wisconsin, county of Sheboygan. His name was Carl Krishner, and he was a native of Germany. He had served his three years apprenticeship in the shoemaker’s trade a certificate to that effect was one of the papers found on him. A copy of a Sunday school paper, “The Young Reaper,” and a prayer book was found in his pocket.

2 Responses to “Never let the facts get in the way of a good yarn.”