Tramp Printers or Passing of the Old Time Print

December 11th, 2014 by Nono Burling Posted in Articles, Digital Collections, For Libraries, For the Public, Random News from the Newspapers on Microfilm Collection | Comments Off on Tramp Printers or Passing of the Old Time Print

The January 2, 1920 issue of The Oroville Weekly Gazette introduces us to an occupation that even in the 1920s had become antiquated by technological advances– the tramp printer, also known as the tourist printer or hobo antimony jerker:

PASSING OF THE OLD TIME PRINT

One day during the week this office had a call from that extreme rarity nowadays, a tourist printer. He was not of the class of the old time tramp print. He was a clean faced American, neatly if not extravagantly dressed, and his breath did not announce his approach before he hove in sight. What a contrast to the drifting antimony jerker of 35 years ago, in the days when “The Pilgrim” and “California Dick” floated from place to place around eastern Washington, clothed in raiment that would put a scare crow to the blush and assisting very materially in the revenue of receipts by consumption of spirituous decoctions. They never wanted a steady job. A few days at the case, and their feet would commence itching for the road, and snatching a free lunch while squandering what they had made in joy water until lit up like the northern lights they would shake the dust of the town in which they had briefly sojourned from their feet and hike out for other pastures. Queer lads were the two old typos mentioned, considered somewhat off the clutch, differing disposition though partners in the way of the life they led. “The Pilgrim” quiet and taciturn in his cups, “California Dick” noisy, truculent, boastful, when loaded, and that was their normal condition. And yet for all that, in the days of the “stick and rule” these old stagers could set up a creditable “string” and they knew every mystery of the print shop. Gone to their last reward, those old boys, and we trust the recording angel dropped a silent tear of absolution when registering their arrival, blotting out those short comings which were really mild indiscretions, for which they were more to be pitied than blamed.

In his book News For an Empire (1952), covering the history of the Spokesman-Review, Ralph E. Dyar mentions “… the tramp printers, a characteristic feature of Western newspaper offices during the eighties and nineties. Their very names were individual, perhaps invented, as: Pilgrim the Printer, California Dick, Seneca G. Ketchum, Major Henby, and J. Peck MacSwain. Most of the itinerants never wanted a steady job. A few days at the case and their feet commenced itching for the road. They would either climb into a boxcar or hit the road on foot for other pastures.”

“California Dick” turns up in various newspapers in the Pacific Northwest as a defendant in court. This bit in the Idaho Statesman (Boise, Idaho) from August 28, 1890 is typical: “A party who answers to the honorable name of California Dick, and another of the same class, were brought before Justice Randall yesterday morning to answer to a charge of drunk and disorderly. They were fined $6 and costs; in default they went up for three days.”

Supposedly California Dick did some hard time in Oklahoma for holding up a stage. He died in Grangeville, Idaho, September 26, 1899. The Spokane Daily Chronicle gave notice of his passing in their September 29th issue: 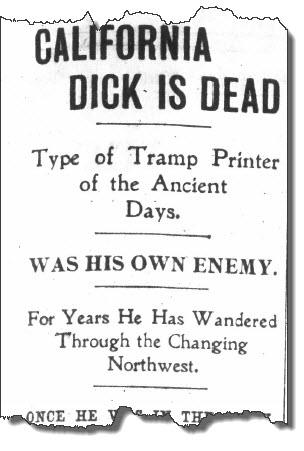 Type of Tramp Printer of the Ancient Days.

WAS HIS OWN ENEMY.

For Years He Has Wandered Through the Changing Northwest.

ONCE HE WAS IN THE ARMY

Passed Away at Grangeville Last Tuesday — Richard Richards Was His Real Name.

“California Dick” is dead. The famous tramp printer whose face and appetite have been familiar to every town in the northwest for nearly 20 years, will never count railway ties again. “Poor Dick,” says everybody– that’s all; if he hadn’t a real friend he hadn’t an enemy.

Just who Dick was, where he came from or when or why he came to the northwest, nobody knows. It is doubtful if anybody ever took the trouble to find out. For a couple of decades the printers of the Pacific slope have simply accepted him as an established fact– a harmless and thirsty fact, to be humored, not questioned or argued down. Perhaps half the printers west of the Rockies have “loaned two bits” to Dick. Maybe he will repay it somehow in another world.

It must be nearly two years since Dick’s last visit to Spokane. From this city he drifted to Grangeville, Ida. The report came a few weeks ago that he was sick in that town; and now comes the Grangeville Press of last Tuesday with this little obituary:

“California Dick” died about 1 o’clock this afternoon at the Moser house.

His real name was Richard Richards, and he was a native of Pennsylvania. An uncle of his was at one time governor of that state, but in all the long years we have known him he never confided any of his past history with us. He is supposed to have been drawing a pension, and therefore it is to be presumed that he served in the federal army during the war.

Our personal knowledge of him extends back to 1881, when “Dick” put in an appearance at the office of our Nez Perce News, at Lewiston, and from that day to this he has been in our employ from time to time, and helped us get out the first issue of the Free Press in 1886. Of late years, probably owing to the receipt of pension money, he has not cared much for work, and has not done anything for the past year, except a few days in this office.

He was a typical tramp printer of a type common enough in the northwest in ante-railroad days, and their sole occupation in life was to roam from place to place, working for a few days, getting on a tear every Saturday night and finally departing as silently as they came. We have known “Dick” to walk into Lewiston in the middle of winter, when towns were more of a rarity and much farther apart than they are today, work for a few days and depart for new pastures as mysteriously as he came.

In those days it was a point of honor with newspaper men to make employment for these tramps, but with the advent of eastern men who “knew not Joseph ” and keener competition in the business, the old-timers have had to watch their dollars more closely, and the tramps have consequently fared harder with the lapse of time. This, we believe, is the reason why “California Dick” has kept so closely around Grangeville for the past two years– to be out of the way of the railroads, where living is supposed to be easier than in civilization. Poor Dick was nobody’s enemy but his own, and now that he has departed hence we can throw the mantle of charity over his failings and believe that death came as a blessing and happy release.

Pilgrim the Printer shows up in the Northwest around the late 1870s. His range appeared to be much broader than California Dick. The Pilgrim was born Samuel P. Haslett, December, 1838 in Butler, Pennsylvania. His Irish-born father, William Haslett (1816-1872), ran a newspaper in Butler and also held offices in the state legislature as a Whig and Republican.

An undated clipping from the San Francisco Morning Ledger, which was reprinted in a collection of newspaper stories in 1890, included this description of Haslett:

Last night Hazlett, known everywhere as the “Pilgrim Print,” came up the Ledger stairs and walked into the composing-room just as naturally as if he had never worked anywhere else in all his life. As soon as he crossed the threshold he was welcomed from all sides, for everybody knew him by sight or reputation. Without taking the slightest notice of the chaff thrown at him from the cases, he shuffled up toward the centre of the room, and leaned against a composing-stone, looking about him like Marius inspecting the ruins of Carthage.

To him a well-regulated printing office, where men work systematically for wages, is an abomination and a disgrace. He would scorn to be subservient to a master. He never took orders from anybody. When he strikes a place that suits him, he tackles a column of type and begins to distribute it. When he doesn’t like his work or his company, he throws on his coat and walks off, scorning to ask for pay. An old, dingy printing office, with worn and blackened cases, battered type and cracked composing stones, suits him best; where the galleys are all shrunk out of shape, the chases all indented, the quoins all mashed and the foreman’s mallet beaten down almost to the handle. Cobwebs on the wall give him genuine delight, and big breaks in the ceiling, denoting the long absence of plaster, are well-springs of pleasurable emotion. An expression of intense disgust shadowed his features as he saw that it was not over a month old. The newness of the racks made him shudder; the air of cleanliness paralyzed him. When he saw the printers around him taking orders from one man, he cast a sad look over the place, such as Napoleon might have thrown on the galley slaves of Toulon. He concealed his contempt as best he could, not desiring to wound their feelings, and when he sneered he did it so softly that few noticed it.

By the late 1890s Haslett returned to the East, where he continued his occupation as a tramp printer. The US Census of 1900 actually caught him in Genesee, Pennsylvania. Haslett, who by this time was described as looking like Santa Claus, died January 9th, 1906 while walking down a street in Easton, Maryland, seeking work. He is buried in Butler, Pennsylvania.

As a WSL bit of trivia, our colleague Shawn Schollmeyer has pointed out that James P. Ferry, who served as Territorial Librarian from 1880-1881, and a son of Washington’s first governor, was not exactly a tramp printer, but was known to perform printing and type work of an itinerant nature.