December 7th, 2016 by Rand Simmons Posted in Articles, Federal and State Publications, For Libraries, For the Public, Public Services | Comments Off on Pearl Harbor at 75 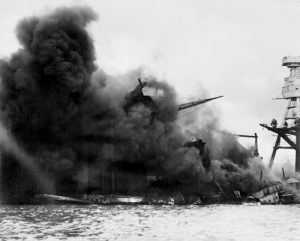 Photo of the USS Arizona which fully sank and was never recovered after the Japanese attack on Pearl Harbor. Public Domain/Wikimedia Commons.

Only five men are still alive that experienced the Japanese attack on the USS Arizona at Pearl Harbor, Hawaii. All five are in their mid-nineties. One of them, 96-year-old Lauren Bruner, lives in Washington State.

Yesterday all but one gathered in Hawaii to celebrate Pearl Harbor Remembrance Day.

Moments before 8 a.m. on December 7, 1941, the United States was ‘suddenly and deliberately attacked.’ Hundreds of Japanese fighter planes and bombers launched a surprise assault on American soil at Pearl Harbor in Hawaii. The volley on the U.S. naval base was swift and devastating: 2,403 Americans were killed, and another 1,178 were wounded; American battleships sunk; other ships were irreparably damaged; and almost 200 U.S. aircraft were destroyed.

The next day, President Franklin D. Roosevelt asked Congress to formally declare war against Imperial Japan. It was then that Roosevelt spoke those famous words, proclaiming December 7, 1941 “a date which will live in infamy.” America had finally joined WWII. That momentous week of loss and defiance took place seventy-five years ago this month. (Text from Government Book Talk, Dec. 7, 2015)

Based on data collected by the Veterans Affairs the WWII Veterans Museum in New Orleans estimates that only 620,000 of the 16 million Americans — men and women — who fought in World War II remain alive. They are now in their late 80s and 90s. Many, like my father, who served in the Philippines, have died.

While it is true that the Japanese military planned and carried out the attack on Pearl Harbor many Japanese Americans fought for their country, the United States. A favorite of mine is a small federal publication, When the Akimotos Went to War: An Untold Story of Family, Patriotism, and Sacrifice During World War II. The citation is at the end of this article.

The Government Publishing Office makes available a variety of government publications that reference the historic Pearl Harbor attack. You will find many or these listed in the Washington State Library catalog dating from 1946.

Hawkins, Trudy. “‘A Date Which Will Live in Infamy’: Remembering Pearl Harbor.” Government Book Talk | Talking About Some of the Best Publications from the Federal Government, Past and Present, 7 Dec. 2015, govbooktalk.gpo.gov/tag/pearl-harbor/. Accessed 7 Dec. 2016.