October 22nd, 2013 by Rand Simmons Posted in Articles, For Libraries, For the Public, Library 21 Initiative, Uncategorized | Comments Off on Washington State Library a leader in Early Learning 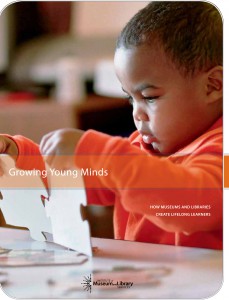 Washington State is listed as one of 10 success stories by the Institute of Museum and Library Services in their 2013 report on early learning, Growing Young Minds: How Museums and Libraries Create Lifelong Learners.

“By proactively responding to new initiatives and policy actions, libraries across Washington have secured their position as key players in statewide early learning efforts,” the report states. It cites several activities in which the Washington State Library has been instrumental: the Washington Early Learning Initiative (2000-2003), the establishment of the Early Learning Public Library Partnership (ELPLP), and a partnership between the University of Washington Information School, the ELPLP, the Foundation for Early Learning and the State Library focusing on research-based evidence of the effectiveness of public library programming on early learning and early literacy.

The report is available online in PDF format.

Limited print copies of the report and the executive summary are available from Leanna Hammond, Washington State Library, [email protected], 360-704-7133.